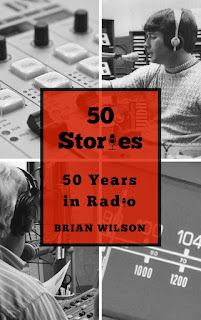 After Ross and Wilson, The Next Generation on Z100/NY sadly imploded, it was back to Atlanta; back to Talk Radio -- PM Drive on Jacor-owned WGST. With all the talking and phone bits I had done over the years on music stations plus the three transitional years on WABC/NY, getting back into Talk Radio was exciting. The Ross and Wilson Zoo experience proved to me that the creative freedom that once flourished in Music Radio was decomposing into micro-managed mediocrity at the hands of incompetent programmers, consultants and the search for the lowest common denominator for an audience.

When I started my first show on WGST, I was not at the top of my Talk Radio game. But most everyone at the station and in the listening audience still had fond memories of Z-93's wildly popular Ross and Wilson show, so content and form weren't all that noticed. For the first few weeks, most of the callers just wanted to say, “Welcome back” and reminisce about their personal favorite R&W story from “back in the day.” It was fun and funny – unless you had arrived in Atlanta after our 1980 departure for WABC. Now 12-13 years later, there was a crowd of new listeners in a different format with no clue what a Ross and Wilson was. Getting off Memory Lane and onto current issues took some effort but, eventually, my prodigal son status wore off and I was just another horse in the Atlanta Talk Radio stable.

Two very interesting things happened during that brief stay -- one was Rush Limbaugh, the other was Talk at Nite, my second journey into TV.

WGST was Atlanta's perennial #2 talk station, forever in the shadow of WSB, the 50,000 watt Cox O&O. It wasn't so much that WSB had the better talent than it was WGST had such a lousy signal, even after a frequency change. WSB could be heard in several states. WGST, with a southerly-directed signal, couldn't be heard in some of the northern Atlanta suburbs where all the white-collar Talk Radio audience growth was taking place. Tough to get ratings when your audience can't hear you.

The one bright programming light WGST could exclusively claim was the brash, new Rush Limbaugh Show, syndicated out of WABC. Still in his early growth phase, Rush did a series of Rush to Excellence Tour promotions, airing his show from affiliate studios in markets around the country, followed by a stand-up and Q&A appearance in a venue large enough to hold an SRO crowd of new and dedicated followers. One of those tours brought him to Atlanta and WGST.

The way it was supposed to work:  Rush would do his regular show from our studios, take a break from 3 p.m. to 6 p.m., then appear at a local venue circa 7 p.m. How it actually came off in Atlanta was different.

Rush and I met in the studio as he was leaving at the end of his show. He had heard of my years at WABC and we played the “who-do-you-know” game, as radio types always do. I made a half-serious comment:  “You ought to stick around for my show; we can call it Rush and Wilson.” He thought that was hilarious and perfect. And so he stayed -- for the next three hours! Despite being total strangers, the show was superb! We played off each other as well – if not better – than Ross and I did after our first meeting in Baton Rouge 16 years earlier.

When it was over, I drove him to his speech and stand-up show. Traffic gave us an additional 45 minutes to chat about radio, politics, programming philosophy, future plans for the show, etc. Inside, Rush went off to freshen up, long enough for me to get drafted into greeting the house and introducing them to Rush.

On stage, I introduced myself to some very nice applause, got off a few one-liners and thanked everyone for listening to WGST.

And now, with half his brain tied behind his back just to be fair, Rush Limbaugh!

The crowd went nuts! Standing O! Whistles! Yells! Everything except flying panties and hotel room keys! I watched most of the show backstage, then hit the road.

The next morning, perusing the Atlanta Journal-Constitution, I noted that one of their liberal columnists had ripped into Rush as well as WGST and conservative Talk Radio in general. Just before noon, I received a call from the PD:

Rush wants to know if it would be OK if he did the show again with you today. He's really peeved at what the paper said and he wants to get his licks in, something he won't be able to pull off on his national show.

Would it be "OK" to do another show with the number one talk show host in the country? Hmmm, lemme think about that for a nanosecond or two.

And so it came to pass:  Rush and Wilson lived to play and fight another day against the evil forces of the liberal elite media! And a good time was had by all, with the possible exception of a certain AJC columnist whose "opinion" was thoroughly shredded from 3 p.m. to 6 p.m.

For my posterity and the historical record, Rush Limbaugh never did another "two-man" show anywhere with anyone after Rush and Wilson on WGST. How about that!

Originally posted just a few months ago, the crumbling of society has accelerated, exacerbated by an aggressively emboldened - or increasingly desperate - MSM to mis- and disinform anyone attempting to pay attention via their "News". Feel free to share with your friends, especially those having trouble with discernment. BW When searching for the reason why things go wrong, stop when you get to the Media. The Media is our Teacher. It's the whole world's teacher.    Everything we learn, we learn from the Media. With screens, cameras, actors and glib, well-coiffed hosts, radio and TV signals, cable, microwave, publishing, the all-powerful Internet with its own 'social media', it instructs us hourly, daily, weekly, month in, year out. The classroom is anywhere; it's ubiquitous. Class is in session even when school is closed. The course are Obedience, Submission, Conformity, Regimentation. There is no 'graduation'. There is no individual achievement, on
Post a Comment
Read more

NOTE: Linked below is the most comprehensive, direct, factual and professional peer-to-peer confrontation of Dr. Anthony Fauci I've seen. It's long. It poses direct questions to Fauci that likely reflect the same questions you have had - but not answered. There is no way this Open Letter can be construed as "conspiracy theory" or the product of a "special interest group" with a profit motive similar to the purported connections between Fauci and Bill Gates. Take the few minutes it will require to read and adsorb the entire piece. Yes, there are a few "medical" terms but nothing that will obscure the totality of the gauntlet thrown at the feet of Dr. Fauci. His various, often oblique or contradictory pronouncements taken as 'gospel' by power-crazed politicians have killed thousands, ruined businesses, even entire cities. Demand answers by writing directly to him directly and your various representatives. Share this with everyone yo
Post a Comment
Read more

In the Age of BLM, here are some stats you may find informative - maybe even useful: • Black males age 18-35 years of age are only 1.8% of the U.S. population, yet have committed 52% of homicides from 1980-2008. Black males (all ages) are only 6% of the U.S. population, yet commit 46% of all violent crimes, and 50% of the gun homicides. If Blacks were removed from the equation, the U.S. gun homicide rate would be equal to Great Britain's, who have some of the most restrictive gun control laws in the world. • The Black homicide rate is 17 per 100,000, a rate over 9x that of the White rate, and comparable to some of those most murderous countries in the world. If the homicide rate for the U.S. were the White-only rate, the homicide rate would drop 84%, making the U.S. rate comparable to European countries. • According to the Bureau of Justice Statistics 2018 survey of criminal victimization, there were 593,598 interracial violent victimizations (ex
Post a Comment
Read more