Showing posts from October, 2012
Show all

October 30, 2012
Why can't anyone get a straight answer  from this President? Impeachment?  What if...
Post a Comment
Read more

If you REALLY want to know what happened in Benghazi - and why...

Lie Back and Think of America?

October 27, 2012
Former show guest Mark Steyn and why losing your virginity is like voting for Obama may be bad  "political hygiene".
Post a Comment
Read more

Vaca: Over - Return to your assumed position

October 27, 2012
Why don't we have 50 weeks of vacation and work 2? You know -- like Greece? The Benghazi scandal could - and should - blow any time now that the True Facts are known. They're just not known by everyone. Bestselling author (" The Amateur ") and totally credible journalist (Newsweek, NYT Magazine), Ed Klein, says Hillary has Obama's re-election in the palm of her hand  because.... As occasional guest Monty Pelerin writes: "Ah, the wonderful underworld of politics! For politicians, it doesn't matter what is good for the country. All that matters is how they can personally benefit from handling or demagoging an issue." Ditto the Lame Stream Press, MP. I interviewed Ed Klein when "The "Amateur" was released. He is not shy about stating the facts. With credentials of a seasoned and credible journalist, his reporting on this story alone should be more than sufficient for his former colleagues to ask the question of any
Post a Comment
Read more

Will THIS change your vote?

October 20, 2012
I've had the pleasure of interviewing Bill a few times. He and his colleagues are putting out some of the best  on-point, thought-provoking written and video material available. His analysis and commentary here  is the most compelling and irrefutable I have seen to date. The lesser of two evils is still lesser -- and rational. It may be "wrong" on principle, but can it be worse in fact? It just may buy the Republic enough time to organize the desperately needed Alternative.
Post a Comment
Read more

October 19, 2012
While we agree on little politically, I recognize a class act -- and some damn good lines -- when I hear it. You will. too.  Click here.
Post a Comment
Read more

A Little Help From My Friends

October 18, 2012
Here's some light reading for those who enjoy being informed. Hopefully, that means YOU! From my occasional guest and friend, Monty Pelerin -- What is going on inside the Administration is the stuff of soap operas. A dysfunctional family tries to hide its incompetence from the rest of the world while individual members jockey to survive. The personal and institutional interplay between the various entities is fascinating. Everyone is running away from responsibility, especially the higher-ups. Others, sensing they are being groomed for an under-the-bus ending, are beginning to push back in an effort to save their jobs and reputations. In short, the dynamics of the situation is one of an every man and woman for him/herself. The Ulsterman Report  provides information regarding the timeline of events and the characters involved. Some of it is hard data and some of it appears to be less so, although plausible. The language is harsh, so if four-letter words bother
Post a Comment
Read more

October 17, 2012
New old friend Judge Andrew "No Relation To Janet" Napolitano returns to the show this afternood circa 4:30 EDT. Catch the chat  right here!  Too late? The pod cast  over here. And here are my contemporaneous notes on  Duh Bait #2
Post a Comment
Read more

October 12, 2012
The only real job the VP has is to get up every morning and say, "So! How's the President?" Nevertheless, those who eschew the NFL's MNF could still have loads of fun watching the One and Lonely Vice-Presidential Debate, featuring Joe "The Joker" Biden  and Paul "The Wonk" Ryan . I dunno about you....but here's what I saw... Note to the SpellChecker Nazis, Grammar Nannies and the Humor Challenged Gang: I gave Joe "Bidden" the extra D for piss-poor performance. See? Isn't that a knee-slapper!? Now you don't have to write some snarky note about "spelling". Think how much time  that adds to your weak end!
Post a Comment
Read more

Dots - Can You Connect Them?

October 12, 2012
Start here: Remember the OJ Trial? Lots of circumstantial evidence, right? Here is everything you always knew about Obama, his wife, Jarrett, Axlerod, all of the Chicago gang of criminals put together in riveting form. The network of evil is unbelievable! Can It All Be Coincidence? By Don Fredrick As I noted in the introduction to my book, The Obama Timeline, a jury at a murder trial will often find the accumulated circumstantial evidence so overwhelming that a guilty verdict is obvious—even though there may be no witness to the crime. “The jurors in the Scott Peterson trial believed the collection of evidence more than they believed Scott Peterson. Among other things, the jury thought that being arrested with $15,000 in cash, recently-dyed hair, a newly-grown goatee, four cell phones, camping equipment, a map to a new girlfriend’s house, a gun, and his brother’s driver’s license certainly did not paint a picture of a grieving husband who had nothing to do with his pregnant wife’s
Post a Comment
Read more

Look Before You Vote

October 10, 2012
Planning to vote this November? Think Barry's your boy? Or are you one of highly coveted Undecideds, the 6%  who will tip the election to America's Doom (or Doom-er)?  Before yanking that lever or making that X or dangling that chad next month, you should consider  the qualifications  of the candidates, right? Are we voting for a Public Servant or  American King? Up for donating but prefer to use OPM? Here's just the place (assuming you wish to support He Who Would Be Emperor). The O campaign has NO SECURITY on their on-line donation site. You can punch in a number, and if there is a card with that number it will get charged with the donation. They don't use the CVV number on the back, they don't use address verification, the name doesn't have to match the card holder name, nothing. As they say in the Defrauding Biz:  WOW! What a deal!
Post a Comment
Read more

Coming to YOUR neighborhood??

October 09, 2012
Why not? Judge Andrew Napolitano narrates this charming home movie, complete  with  inconvenient questions. Yes,  it contradicts the common narrative -- but then most Truth does.
Post a Comment
Read more

Your money (or what's left of it)

October 05, 2012
and why they are  so important.  Hey! You may run into Andrea Mitchell some day!
Post a Comment
Read more 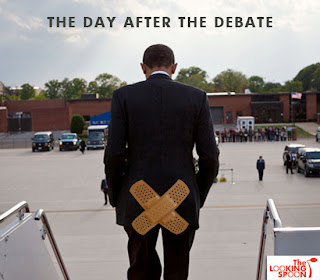 October 03, 2012
If "Yes", you might wanna give  this a look ; If "No", you might wanna take a peek  at this ; If "Maybe", take a gander  here Voting age friends? Send them  this Are You Happy To See Me Or......? Have some fun! Ask your Favorite Candidate what s/he thinks about this  minor incursion into your privacy  and what will they do about it? You remember that quaint old  4th Amendment , right? Those Dead White Guys, the Founding Dads! Were they just crazy nuts? What were they thinking?!?!?
Post a Comment
Read more

October 02, 2012
The Medium is The Message!..... Art Imitates Life - and even current events! Check  this  out -- from my "Early TV Shows That Had Unknown Political Impact On Me"  files...
Post a Comment
Read more
More posts