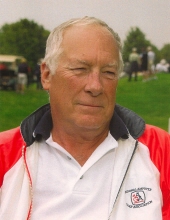 Robert Craig Wilson, 77, a resident of Amherst, NH, died on March 22, 2018 at his home. He was born January 16, 1941 in Wayne, New Jersey to Robert Baer Wilson and Katharine Ann Greiner. He graduated from Fairleigh Dickinson University with a BA in Economics in 1964. After graduation he joined the U.S. Navy, was commissioned in February 1965 and received his Naval Aviator wings in 1967. He married Nancy Howatt in 1972.

Bob saw three tours of duty in Vietnam aboard the aircraft carriers USS Yorktown, Hornet and Kitty Hawk. In February 1974 he lost both legs below the knee in a flight deck accident on the deck of the Kitty Hawk. He retired from the U.S. Navy in August 1974 with the rank of Lieutenant Commander.

Bob became actively involved with the National Amputee Golf Association while living in California. After moving with his family to New Hampshire in 1986 he was elected to the position of Executive Director. During this time he founded the First Swing Learn to Golf program to teach golf to the physically challenged community. In addition to his work for NAGA, he became editor and publisher of Amputee Golfer, a magazine directed to an amputee golfing population around the globe. It should be noted that the National Amputee Golf Association is an all volunteer organization of amputees working to help other amputees.

He was actively involved in conducting First Swing clinics for wounded soldiers returning from Iraq and Afghanistan at Walter Reed Army Hospital, Brooke Army Medical Center and Ft. Carson, Colorado. These clinics involved teaching pros and rehab specialists how to teach their patients on the first day of a clinic and working one on one with the disabled on the second day. When he told his story to returning soldiers he said he was a relic of the Vietnam era. Bob was an amputee for 44 years. Broken soldiers who didn’t know how they can face another day found comfort in being around one who did face the day. And then the next one.

In September 2005 he was featured in Golf Digest in a My Shot article by Guy Yocum. Other highlights included being awarded the DAV National Commander’s trophy in 1990 and the International Network of Golf Writers and Associates Dennis Walters Courage Award in 1995.

I don’t think there are words to adequately describe Bob’s contribution to the disabled community. He invited questions wherever he went. People would just walk up to him and begin sharing their own stories or those of relatives who have lost limbs. He shared his story with anyone who wanted to hear it. He taught by example.

Funeral services are private. Burial will be in the New Hampshire State Veterans Cemetery, Boscawen, NH, at a later date. In lieu of flowers, donations in his memory may be made to the National Amputee Golf Association Scholarship Fund (nagagolf.org) or Veterans Count New Hampshire (see Facebook).