Him: “Ya know, leading up to 1776, there was a lot of thinking and discussion and compromise before they felt the need to start shooting.”

Me: “Right – but all those considerations were only debated among the few intellectually adroit. Like today, the Majority didn’t know or didn’t want to know. Today, you can see them waving their “Ignorance Is Bliss” flags or sporting their “Yawn for Apathy” bumper stickers.”

Him: “Well, I maintain that the forces for goodwill ultimately win out.”

Him: “What we need is for Donald Trump or one of his acolytes with his values and ideals, to run again!”

Me: “Run again? Who cares? Trump is not the Messiah and proved that pretty quickly. He may have some good ideas, good instincts, but have you heard any ideas about how he'll deal with the Deep State? Democrats? RINOs? The MIC? The MSM - all of which will all be totally aligned against him? Again. The same for any ‘acolyte’. Oppose the Machine; deal with the Machine; get destroyed by the Machine. Backed by historically gutless, spineless, brainless Republicans automatically scribbles the Rest of the Story for you. Trump’s “values and Ideals”? How many have survived the Biden Administration? Hint: Zero!”

Him: “It will take the patience of Job to get through this!”

Me: Didn’t you see the Obits? Job's been dead a long time. Without an aroused, informed, motivated population, current indications are we will be, too. before Freedom and Liberty sweep over the land again.”

Him: “Well, I believe the Best is yet to come!”

Me: “Maybe. If you’re a toddler, but not likely in our lifetime. Probably not his or hers either.  You can ignore the Laws of Physics, Economics, Human Nature, but they will not ignore you. Any "peaceful solution" will take a long time and considerable pain. But if you have Reason and Facts to replace Faith and Hope, let’s hear ‘em!”
Him: (crickets)... 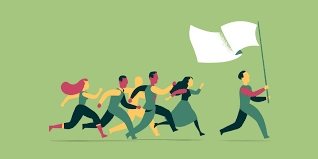