November 17, 2019
There is a profound difference between natural Stupidity and aggressive Ignorance. One can't be helped or blamed on the victim; the other, a willful, spiteful, self-destructive choice freely made.

With that distinction in mind, consider:

Sunday, on FOX's Journal Editorial Report, host Paul Gigot, and 3 other like-minded comrades blustered, bloviated and pontificated about President Trump's now nearly-famous Tweet concerning ex-ambassador Marie Yovanovitch, tweeted while she was "testifying" before the so-called 'Impeachment Hearing' at the time. 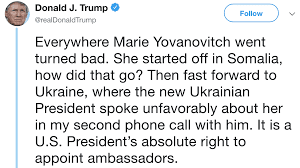 The four Brainiacs couldn't argue with the accurate content of the Tweet, but still found a way to pan it bigly, blathering on about how rude, bad, destructive, unnecessary it was. They ended the segment wondering aloud "Why does he continue to do it?" hinting it must be some serious congenital problem.

How can the root cause for the daily serving of Trump's Tweets not be obvious to anyone with a room temp IQ and just a casual familiarity with the operations of the MSM, especially since the beginning of the Trumpian Era?

The Simple Answer: He does it because of you, your media colleagues and your abdication of everything Journalism ever was or (worse) still purports to be today.

Using one of the MSM's favorite lines, 'without proof', the Network Drama Queens (formerly known as New Anchors/Reporters) along with their NYT, WaPo and other print buds, serve up daily hysteria of any/everything they can parse from any/every Trump comment, action, utterance, spelling, business, wife, son, daughter or decision. There is no "fair". There is no "balance". There is no objectivity or 'other side'. As accurately reported elsewhere: Journalism is dead; Punditry reigns in its place. Few facts; mostly opinions. And everyone has at least one. Since the MSM (broadcast, cable, print, blog, 'social' and 'alt-media') is the only source on matters of current events, when those with the largest audiences parrot verbatim the same line of USDA Prime BS as "news", the audience has little choice than accept as fact the sordid fantasies, prejudices, omissions and commissions of the biased and elite Punditry class. (Note to ABC's David "Hands" Muir: No number of amateur-provided cell phone Disaster Vids can replace long-standing principles of honest journalism.)

Faced with the non-stop 24/7 "News" cycle pumping out the Hits on Trump, how else and how better to co-op the mis- and disinformation and outright lies passing for "news" than using a Twitter account to pole vault over the MSM and in front the faces of citizens otherwise stuck with Morning Edition or the Evening News and Hysteria? Knowing the same MSM will report the Trump Tweet messages is near genius in its co-op of the media's long-standing liberal bent.

For brilliant reporters and pundits not to be able to noodle this out for themselves is either glaring Stupidity or aggressive Ignorance. Maybe worse.