Originally posted just a few months ago, the crumbling of society has accelerated, exacerbated by an aggressively emboldened - or increasingly desperate - MSM to mis- and disinform anyone attempting to pay attention via their "News". Feel free to share with your friends, especially those having trouble with discernment. BW

When searching for the reason why things go wrong, stop when you get to the Media.

The Media is our Teacher. It's the whole world's teacher.  Everything we learn, we learn from the Media.With screens, cameras, actors and glib, well-coiffed hosts, radio and TV signals, cable, microwave, publishing, the all-powerful Internet with its own 'social media', it instructs us hourly, daily, weekly, month in, year out. The classroom is anywhere; it's ubiquitous. Class is in session even when school is closed. The course are Obedience, Submission, Conformity, Regimentation. There is no 'graduation'. There is no individual achievement, only the 'Greater Good'.  "We're all in this together" is our motto. 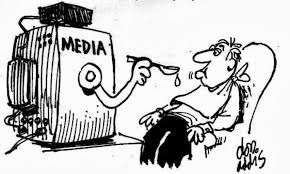 The Media teaches unquestioning obedience through Fear based on Ignorance, the greatest, most effective motivational tools ever; critical thinking is forbidden. Distortion and disinformation construct the new and ever-changing 'normal with a vocabulary to wordsmith the emotive code words that fill the Orwellian lexicon: "minuscule" becomes "gigantic"; insignificant events are "explosive".  Seasonal storms are always "life-threatening"; the flu becomes a Pandemic. Property damage always "resembles a war zone". A deadly crime morphs into "heart-wrenching tragedy" with cell phone video of a crying woman, (+10 if she's holding a child, +50 if she is holding a baby, +100 if she is also pregnant). Sirens, blood, the sartorial anchor intones"Warning - some images may be disturbing to some viewers"; a close-up of a shell casing gets extra dramatic credit. Any increase of anything "skyrockets". Disagreements turn into "Battle Grounds". Looters are "Peaceful Protesters" while rioters are "Mostly Peaceful Protesters". Factual analysis opposing the Official Media Narrative is a 'vicious attack', a 'scandal'; contrary opinions based on irrefutable facts are declared "racist!". Every story, newscast or issue features "bombshells" while Reality is adjusted or ignored whenever it doesn't fit in the Media's syllabus...which, of course, it rarely does.
And Class is never dismissed.