March 12, 2022
Check out one of Facebook's latest censoring methods 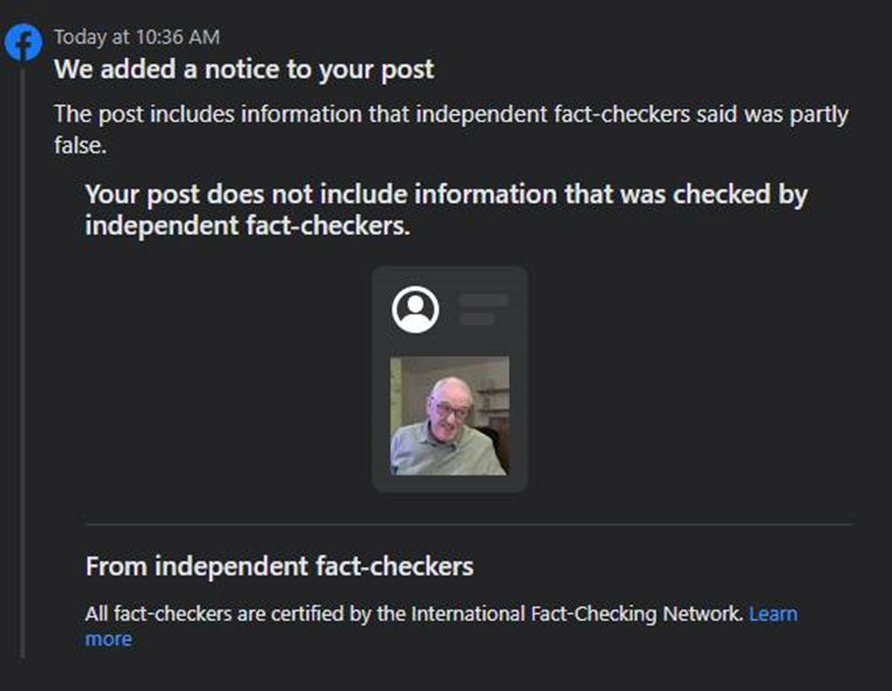 One might make a debatable case for literally censoring certain material, e.g, graphic sex or violence on publically accessible platforms – at least until society’s moral tolerance descends to greater depths. However, the evolution of what’s now SOP, has brought us the above: “Restrictions With Counseling Due To Lack Of Purity”. That any particular post failing to encompass every known or even conceivable “fact”, must be stamped with a Warning Notice or Advisory is yet another tell-tale step toward complete censorship.

The ‘notice’ above was unique in one respect: the tag line ‘independent fact-checkers ‘certified by the ‘International Fact-Checking Network”.

Until this ‘notice’ appeared, it had been only recently been revealed common ‘fact-checking’ was based on the personal opinion/experience of some Anonymous Fact-Checker.

"...certified..."? "International Fact-Checking Network"? Is this an international organization of people, all with the same opinion on all the same subjects? How is that possible? How long has this group been around? Founded by whom? Funded by whom? Does it have any competition from people with contrary opinions? Who decides upon what “facts” these “opinions” are based? Are 'feelings' used in place of 'facts'?

Turns out, these self-righteous folks have been around for quite a while:

The International Fact-Checking Network (IFCN) at Poynter was launched in 2015 to bring together the growing community of fact-checkers around the world and advocates of factual information in the global fight against misinformation. We enable fact-checkers through networking, capacity building and collaboration. IFCN promotes the excellence of fact-checking to more than 100 organizations worldwide through advocacy, training and global events. Our team monitors trends in the fact-checking field to offer resources to fact-checkers, contribute to public discourse and provide support for new projects and initiatives that advance accountability in journalism.

Such lofty goals! That’s nice. But considering the notoriously liberal infestation of Journalism, Journalism schools, the MSM (Mainstream Media) coupled with the subjective semantics of the Organization’s ‘mission statement’, rational individuals might wish to consider the question (slightly altered) posed by the Roman poet Juvenal or, more recently, Startrek, the Next Generation: Quis hoc compescit oscillantnium? (Who fact-checks the fact checkers?)

The Poynter Institute for Media Studies , the parental unit that birthed the International Fact-Checking Network, prides itself on being a non-profit journalism school and research organization. A cursory search of their web site testifies to their predictably liberal slant.
In “An open letter toYouTube’s CEO from the world’s fact-checkers”, the IFCN wags their International fingers for “allowing its platform to be weaponized by unscrupulous actors to manipulate and exploit others, and to organize and fundraise themselves.”

“…non-partisan…”?! What happened to the war against ‘disinformation’ and ‘misinformation’? With a roster of individuals unabashedly affiliated with notoriously liberal institutions, the coveted ‘transparency’ and “accountability in Journalism” cannot be expected to exceed the fair and balanced content of the average NPR news program.

One of IFCN’s recommendations ‘that would make a great deal of difference in reducing the dissemination of disinformation and misinformation on YouTube” is to follow the Facebook model:

“Beyond removing content for legal compliance, YouTube’s focus should be on providing context and offering debunks, clearly superimposed on videos or as additional video content.”

Slapping “Notices” like the one above, obliterating the offending post for reasons supposed would, indeed, “make a great deal of difference”. But not a constructive one.

The copious explanatory (and recruiting) material ICFN provides contains several interesting pieces that iron out a few wrinkles in stories that have attained a modicum of circulation. However, very few rise to the level of malignant misinformation. Treatment of larger issues – COVID, Ukraine, Biden – reveals some malignant problems that should warn any self-professed independent Fact-Checker like yourself – or someone you know

“There are no U.S. military-run biolabs in Ukraine.”

“While the U.S. may provide funding to upgrade or build labs in other countries, the labs are run by the partnering nations and the program’s goal is to prevent biological threats, not create them.”

Apparently, the IFCN Fact-Checker failed – or decided to ignore – multiple stories that contradicted the unambiguous pronouncement (here, here and here).

That’s one example. Cruise the website. Collect them all!

How about Fact Checks that pop up on live TV”? Read about “SQUASH”.

Here’s the rub: Poynter and its IFCN is populated by a crowd of well-trained, highly-credentialed liberal and media folks. NYT, WaPo, NPR, Harvard, USAToday, George Washington U., U. of Colorado, Duke and similar left-tilting organizations, media outlets and academia are well represented.

The political coverage, editorial content, policies and public statements of the above would tend to ensure the practice of ‘fact-checking’ not for the facts per se, but how the story in question comports with the popular government-media narrative. If it sufficiently parallels the Evening News, it gets a pass. Stories and articles challenging the Approved Version and gaining public traction are not likely to get the ‘No Biolab” treatment above.

Simply put: a ‘free press in a democracy is endorsed by every person and organization mentioned here. That may be more telling than any one of them has thoughtfully considered. It’s long been established and routinely ignored: America is not a Democracy. Like all forms of government, Democracy ultimately relies on Force. Maybe that’s why the IFCN Fact-Checkers are so enthusiastic about telling others what they may read, hear, watch, believe and accept – even if it takes Force to censor what they consider to be ‘misinformation’ and ‘disinformation’ that doesn’t play well with their prejudiced version of ‘facts’.

Fact-Checking as proposed above, a public service and high calling to some, ultimately results in the rejection of Free Choice and Individual Responsibility. To discover the Truth, “All Information Matters”. But the superimposition of contradicting perspectives that have consistent philosophical and political similarities that lead to the destruction of Liberty needs rejection. It’s your obligation to perform your own Due Diligence and exercise your absolute right to believe whatever you choose.

From Dealy Plaza to Wu Han, from July 4, 1776, to January 6, 2021, from Kamala Harris to Ken Jennings, do your own ‘fact checking’. It’s guaranteed to be more productive and accurate than letting others – with their own agendas – ‘fact-check’ your belief and principle.

Do it for yourself.