Is the Declaration of Independence Treason?

March 28, 2022
While reviewing the docs of the Founding Dads, I noticed something that caused consternation. After researching the written works of Experts way smarter and more educated than I, they did NOT provide a satisfactory answer.

So what’s the problem?

“…that whenever any Form of Government becomes destructive of these Ends, it is the

Right of the People to alter or to abolish it, and to institute new Government…”.

For the rest of us arriving later, nothing has changed. The Declaration has not been revised, re-written, abridged or PhotoShopped; no asterisks, footnotes, additions, deletions or addendums. If Government inverts and perverts its role and begins another “…long Train of Abuses and Usurpations”, it would be nothing less than logical, reasonable, imperative and legal for the citizens of a Free Country to unite and do whatever necessary to take their government ‘Mulligan’. As it is written, “it is [our] right, it is [our] duty to throw off such Government and to provide new guards for [our] future Security.”

Are we there yet?

But wait! What about that ‘throw off’ part? The power of Government has grown to be absolutely corrupt. That’s what ‘absolute power’ does absolutely (Lord Acton). What “Constitutional restraints” hold the DC and State Leviathans back from any tyrannical actions it wishes to take? Rights of the Citizens be damned! “Life, Liberty, Pursuit of Happiness?” Ludicrous! Endless Wars, ‘mandates’, money printing and debt – what document, law, government branch or political party stands behind the sanctity of Freedom, Liberty and Natural Rights and enforcement of the Rule of Law?

So ‘throwing off’ this un-Constitutional charade of ‘government’…how is that done exactly?

The MSM and gaggle of gag-worthy socio-psychopaths called “Elected Leaders” would have you believe that’s what the “Jan 6th Insurrection” was all about: a government take-over by a few hundred unarmed citizens who slow-walked on and into their tax-paid property, the “People’s House”, to ‘express their grievances’ to those laughingly referred to as ‘elected representatives’ cowering in closets and behind desks.

But why do they insist on calling it an ‘insurrection’?

This might be a clue – which ties into the problem referenced above.

In the Constitution, Article 1, Section 8:

How would that work? Wouldn’t these ‘Elected Leaders’, the same scum guilty of using their monopoly on the power of Government for the disestablishment of Liberty, declare ‘altering’, ‘abolishing’ ‘throwing off’ this plundering system of Government an “insurrection”? Haven’t they accomplished that already? What “Leaders” recognized this citizen action as a rightful exercise of the 1st Amendment’s plain language and support of Jefferson’s “Declaration”?

More to the point: how did that provision get into the Constitution? Were the combined brains, intelligence, education, and experience of the company of Jefferson’s, Franklins, Adams sufficient in their wordsmithing and philosophical subscriptions to know those who came after would be inclined to repeat the sins of those who went before them? Only 10 years after the ratification of the vaunted Constitution, Congress passed the Alien and Sedition Act, a clear violation of the First Amendment (and 10th, if you’re a Jefferson fan). Over the years, contrary additions and amendments were added, e.g.,

“Whoever incites, sets on foot, assists, or engages in any rebellion or insurrection against the authority of the United States or the laws thereof, or gives aid or comfort thereto, shall be fined under this title or imprisoned not more than ten years, or both; and shall be incapable of holding any office under the United States.”

But how does the Declaration’s statement about the ‘right to alter, abolish’ etc., square with the authority assigned specifically to Congress to call out the Militia and ‘suppress Insurrections”? When does altering, abolishing, ‘throwing off such government’ morph from “Admirable Advice for Freedom” to “an Insurrection subject to the force of the Militia?

One Constitutional “expert” (you’d know his name) told me “abolishing’” stuff referred only to voting, petitioning, letter writing and such. Was King George subject to a Vote? What if voting doesn’t work? Doesn’t ‘voting’ represent the force of the Majority over the Minority? Isn’t that the primary earmark of Democracy? Is America a Democracy? When did that happen? Did anyone tell Ben Franklin? What if voting is rigged? (as if that could ever happen!).

Another high-profile author and judicial analyst advised me it was a mere “anomaly in writing, not atypical in the time of quill and ink.” But doesn’t that early form of a Fat Finger typo now have the force of Law?

With this language embedded in our Constitution and Government’s actions toward participants in the Jan 6th demonstration, it would appear we have spit in Jefferson’s otherwise untrammeled eyes. Exercising the (former) Right to abolish a government ‘destructive of these ends’ has been reclassified, redefined and prosecuted as an Act of Treason.

Imagine. “Life, Liberty and the Pursuit of Happiness”, the ends and protection of which is the primary responsibility of Government enshrined in the Declaration of Independence has been declared Treason.

And here I thought we overthrew King George when apparently we just put him on Hold. Good thing Tom Jefferson and the Founding Dads aren’t around. They would, indeed, be up for Treason. Again.

‘None dare call it treason’? Then let’s call it ‘Government’. 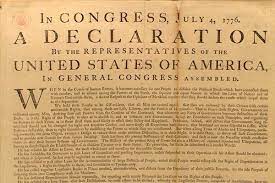 CP+MSM=T -- A Formula for Understanding

Say there, Friend…have you been searching for an answer to ‘What the hell is going on?’ Do you find yourself saying repeatedly “This doesn’t make any sense!” Or using ‘WTF?’ in your business letters and Mother’s Day cards? Understanding the simple formula above can solve the problem. CP stands for the Cloward-Piven Strategy, a 1966 political concept conceived by two American sociologists, Richard Cloward and Frances Piven (who also led an active activist life moonlighting from their gig at Columbia U.). The idea was based on their belief lotsa folks eligible for Welfare bennies weren’t getting their spot at the public-provided trough. To resolve that tragedy, they needed to foment a sign-up campaign so large, the sheer numbers would blow the doors off the administrating agencies, creating a crisis so big, it would shake awake the DC bureaucrats and emotionally driven Democrats, always sensitive to trading Boo-Hoos and Temper Fits for votes, government expansion, involvement, and depend
Read more