Nothing Changes As Long As You Obey

May 17, 2020
From: Paul Rosenberg
I hear the same complaints about politicians that you do. And while I understand them, the fact is that complaining accomplishes almost nothing. And there is a very simple reason why complaining has no real effect:
Because the complainers keep right on obeying.
As long as you obey, the things you complain about will keep on happening.
The Proof
This idea that “nothing changes as long as you obey” has a modern proof – that of American blacks in the southern United States. Specifically, between the civil war and Martin Luther King Jr.
King is badly misunderstood. His legacy has become a tool for garnering of political power. He has been turned into a semi-mystical symbol and used by power grabbers of many types. 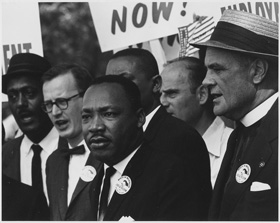 The real Martin King, however, was a minister who exposed the truth that obedience keeps us in chains. His crucial synthesis was to combine disobedience with goodness. His crucial work (and this is greatly under-appreciated) was to hold disobedience and goodness together.
Blacks suffered for many decades in the American south. They complained endlessly, but the laws were against them and remained against them. A significant number of white people were sympathetic, but everyone obeyed the law and little changed.
Until King came along, of course, with his new strategy of goodness plus disobedience.
King, for whatever his shortcomings, was a serious minister, and had a clear vision of what goodness entailed. And, he became very good at communicating it. King added disobedience to goodness, and combined them with teachings on courage and self-control.
Within a decade or so of using this strategy, things changed in the American south. First, individuals changed. And, after a while, laws followed.
There is far too much to tell of this decade, so I will give you some quotes from Dr. King:
Non-cooperation with evil is as much a moral obligation as is cooperation with good.
We will not obey unjust laws or submit to unjust practices. We will do this peacefully, openly, cheerfully because our aim is to persuade. We adopt the means of nonviolence because our end is a community at peace with itself.
Most people can’t stand up for their convictions, because the majority of people might not be doing it. See, everybody’s not doing it, so it must be wrong. And since everybody is doing it, it must be right.
Cowardice asks the question: is it safe? Expediency asks the question: is it politic? Vanity asks the question: is it popular? But conscience asks the question: is it right? And there comes a time when one must take a position that is neither safe, nor politic, nor popular – but one must take it simply because it is right.
Human salvation lies in the hands of the creatively maladjusted.

How to Stop Obeying

First of all, understand that how to do this must be YOUR decision. If you follow the “blueprint” of anyone but yourself, you’ll be falling right back into the same trap of obeying an authority. Yes, we’ve been trained in that all our lives, but it remains a fundamental error.
You must decide for yourself what path to take, and you must – inside of yourself – summon the courage to act upon it, without anyone else telling you what to do.
You must choose and you must act. Until then, your suffering will remain. But when you do choose and act, you make yourself a free man or woman.
So choose a good path, then break the inertia of compliance and step out on your own. Make yourself into someone you’ll be proud of.