Paul Kersey, Where Are You?

"What if there was a real Paul Kersey riding the New York subways right now? What if a Paul Kersey was cruising the South Side of Chicago or Buckhead outside Atlanta or Baltimore’s Inner Harbor?"

Something Completely Different Podcast
Remember Paul Kersey ? How about the 1974 movie, Death Wish? Watch the trailer. I’ll wait here….
Remind you of anything? How about the massive crime wave that’s sweeping the country? And not just recently in major metropolitan areas where vermin dependably fester and thrive - like Son of Sam, The Boston Strangler, The Zodiac Killer or any weekend in Chicago.

Violent crime and mass murders are taking place in schools, nightclubs, churches and synagogue in towns much smaller than the Top 10 markets. Remember Lancaster, PA and the Amish girls, 5 murdered, 4 wounded in a suburban school house by Charles Roberts IV, a 32 yr old milk truck driver? Similar to recent Parkland, Florida and Uvalde, Texas school shootings, heavily armed police stood right outside but failed to intervene, thwarted by poor training and bureaucratic red tape. Now the country is witnessing a tsunami of criminal activity from robbery to rape to car theft to home invasion to assault to arson to domestic abuse from coast to coast in broad daylight; the Evening News is full of it.

Don’t look to the ‘authorities’ or the ‘justice system’ where your tax dollars go to ‘serve and protect’ you. Unscrupulous billionaire scum like George Soros and Michael Bloomberg generously fund politicians and big city DA’s to establish anti-gun laws and ‘No Cash Bail’ programs enabling robbers and rapists to walk free minutes after their apprehension; most go on to commit more crimes.

Some media like FOX and the NY Post have put out scathing reports demanding elimination of the ‘Get Out of Jail Free‘ programs, as well as an end to Defund The Police actions in many urban areas with the worst crime. The stories demonstrate how the failure of police to respond promptly, along with the inexplicable release of those who actually get arrested, has all but eliminated any fear, much less respect, for police or the law while simultaneously reducing the number of police who see risking their lives for a dysfunctional judicial system just isn’t worth it. Anti-gun laws disarming citizens are just as criminal as the thugs.

While police departments are decimated with early retirement of frustrated cops and politicians hide behind occupational apathy, innocent citizens are brutalized at high noon, out in the open on city streets with no police presence, response or pursuit; standing in place against aggravated assault isn’t worth the time and effort of over-worked, under-paid, unappreciated police officers still smarting from ‘Pigs in a blanket…” chants of two summers ago and Defund The Police efforts undermining them today.

The aphorism ‘threat to our democracy’ is inextricably tied to ‘maintaining social order’. Without a means of consistent, dependable enforcement of civil behavior, society implodes.

Now, back to our feature film, Death Wish. Where is the 2022 incarnation of Paul Kersey? One might say his point of no return passed some years ago. Others would say, ‘Paul Kersey was a vigilante; we can’t have that kind of conduct today!’

But we do. And we celebrate it. While the stories are mostly hidden on back pages or not reported at all, occasionally the public gets to hear the truth about how a bad man with a gun is stopped by a good man with gun. John Lott’s More Guns, Less Crime shows how good laws and good citizens with guns can change a crime wave into a puddle.

That might be a tough sell today in a population riddled with entitled snowflakes, limp-wristed ‘man bun’ weenies and painted girls (maybe) sporting pierced nipples and other body parts. Sadly, many segments of our society reserve their admiration for the gang-bangers and Payment-Free Shoppers, seen too often on the Evening News.

In Florida, crime was rampant until Concealed Carry laws were passed and crime dropped like a swimming brick. Today, Miami has some of the lowest crime stats of any city its size, partially because it is flourishing economically; people are happy and they want to stay that way. Thanks to Concealed Carry by private citizens and a well-trained Police Dept., Miami streets are safer than most. There’s no Paul Kersey there but there is Concealed Carry and the Castle Doctrine. Neither of those exist in most major markets where they’re needed.

The fictional Paul Kersey was a good guy with a gun. Death Wish was set in NY City, 1974. Maybe one of the NYC TV stations could show Death Wish again one day soon; maybe on PBS as ‘educational programming’.

What if there was a real Paul Kersey riding the New York subways right now? What if a Paul Kersey was cruising the South Side of Chicago or Buckhead outside Atlanta or Baltimore’s Inner Harbor? Watch the movie ($3.99/YouTube) to see where this goes.

Paul Kersey, where are you? 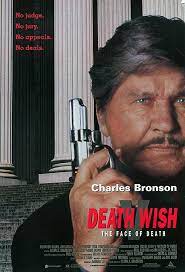