June 09, 2020
Note: I received the following from a close friend who recently moved to a charming Southern village in SC. It's irresistible little downtown area and gorgeous tree-lined streets have been a tourist and retirement magnet for years. Unfortunately, all this quaintness camouflaged some unpleasant issues deep within the social landscape that the Chamber of Commerce would prefer remained there. To be fair, one wonders if this would have happened without the hysterical media hype of the last few months.
BW


I went grocery shopping today. Usually not a very contentious task, rather mundane, in fact. But something happened at this store in a little Southern town that now has me resigned that the world, the country, the town and life in general will never be the same again.

The trip down the aisles started as unexciting as any trip to the store begins. I pulled out a cart, grabbed my list from my purse and began loading the cart. Nothing out of the ordinary except the several remaining empty shelves where toilet paper, soup, rice and other goods are still out of stock. A couple of store employees greeted me as I decided between brands of pickles.

After I reached the check out, it was then I learned this would be a very different shopping trip indeed.

I began to put my items on the conveyor belt. The 20-something cashier looked up at me, looked away, and heaved a large sigh. I figured she was having a bad day.

But then she began taking her bad day out on my groceries -- ripping the plastic bags off rack, slamming them down to try to open them, throwing my groceries in the bag with unusual force, even dropping some items on the floor. I tried to make a joke, “Guess those bags aren’t cooperating today.”

Here’s the rest of the conversation, as close to word-to-word as I can be:

“Yes, you and your ‘friends’ come in here and shop and don’t know anything about us. You’re privileged."

Not being into confrontation, I stammered, “Excuse me?”

“You know what I mean, you can shop whenever you want -- you’re here now, right? If you didn’t feel privileged, you wouldn’t be shopping now.”

“What does shopping now have to do with it?”

“Because if I didn’t have to work, I’d be watching George Floyd’s funeral. Everyone should be watching that funeral. If you aren’t watching, it means you don’t care and you’re showing your racism.”

I must have had a strange look on my face. There was no one in line behind me, but the cashier one aisle over looked up and called the manager. He quickly came out and asked if I was OK. He looked at the cashier and then looked at me and then started bagging up the groceries. Relevant only to relating the story, the cashier I was speaking with was black. The other two employees were white.

As the manager bagged, the cashier just stood there, looking at me. Then she just shook her head. My M.O. is to leave things be and in just about any other situation, I would have left quietly and then regretted that I didn’t say anything. But this time, I felt I truly had to say something.

Now the manager interrupted me, “Ma’am, will you come over here to Customer Service? We can discuss this better there.” I asked why and he told me that he wanted to speak to me away from the employee. When we got over to Customer Service, he asked me if I wanted her fired. I said it wasn’t up to me whether or not she should be fired. I felt strongly that I would be blamed for her losing her job and that would only incite things more.

I turned toward my cart to leave. The cashier had disappeared, probably to the break room. The manager apologized to me again and admitted he probably wouldn’t – couldn’t fire her.

I wish I could end this story with some wonderful anecdotal comment that wraps the whole thing up in a bow, indicates we’ll all be OK and get along just fine. But I can’t. I don’t know what will happen to that young woman… and I truly hope she realizes sometime soon she doesn’t know me at all. 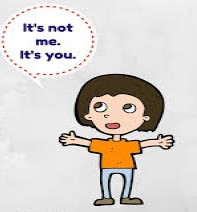