"Today, the “Mainstream Media” has squandered all credibility. Serving as a shield for corrupt politicians – and their kin – it is managed by the 3 monkeys who hear, see and speak no evil of those of a certain political persuasion."

Podcast transcription. Hear it here: Now For Something Completely Different

Remember this Oldie But Goodie?

Listen, my children, and you shall hear

Of the Midnight ride of Paul Revere

On the eighteenth of April, in Seventy-Five:

Hardly a man is now alive

Who remembers that famous day and year.

Through all our history, to the last,

In the hour of darkness and peril and need,

The people will waken and listen to hear

The hurrying hoof-beats of that steed,

And the midnight ride of Paul Revere.

Henry and the Rockin’ Longfellows

Of course, students of American History - all 63 of you - realized long ago, Paul Revere never made that fabled ride. He, along with co-conspirators Dr. Samuel Prescott and William Dawes were pulled over by a British patrol accusing them of RUIOR (Riding Under the Influence of Revolution). It seems the Red Coats were aware of the trio of patriots and the rumblings of Revolution they and other were fomenting in sleazy Boston pubs and during Happy Hour in Concord, Lexington and other Boston ‘burbs.

While Prescott and Dawes escaped, only Prescott made it out to ‘every village and farm’ with the storied warning, “The British are coming” (repeat). Revere was released but without his noble steed. His part of the mission foiled, he hoofed it back to Lexington. Before his death, he perfected Revere Ware cooking utensils that serve as his legacy to this day.

Upon learning the historical facts, many questioned why Longfellow insisted on immortalizing Paul Revere in his famous Midnight Ride. Longfellow stated the obvious: his poem would have lacked its tantalizing invitation had the verse been “Listen my children and you shall hear of the midnight ride of… Dr. Samuel Prescott.”

What greater lessons can we take from this bit of historical trivia?

Even a cursory examination of current events fairly screams the dire straits of the American Republic. Learned pundits, writers and speakers in multiple venues warn daily about the dysfunctional status of every American institution. From the corruption of politicians and Government bureaucracies they control to the corporate cronyism that radiates from K Street advancing the well- funded interests of the “Bigs”. From Big Pharma, Big Tech, Big Oil to the degradation of science, senseless endless wars, a two-tiered criminal justice system, the Creature from Jekyll Island debasing the currency, creating economic upheavals of Inflation, Recession, Boom and Bust cycles on the verge of rendering the American Middle Class extinct, debasing the American Dream into the American Nightmare. The greatest travesty of all has been the deliberate demise of the Free Press.

With the First Amendment, the media is the only business granted Constitutional protection. In return, the Free Press would accept the roll of ‘watchdog’ at the gates of Freedom and Liberty, guarding citizens, warning them of any government incursion that exceeded its Constitutional bounds and its mission to protect the inalienable rights of the people who granted its authority.

Too bad it didn’t turn out that way.

Today, the “Mainstream Media” has squandered all credibility. Serving as a shield for corrupt politicians – and their kin – it is managed by the 3 monkeys who hear, see and speak no evil of those of a certain political persuasion. Their daily product once known as “journalism” and “news” is propaganda spouted by blow-dried readers, manufactured to support the goals of their solipsistic masters through nearly verbatim repetition of mis-truths, half-truths and outright lies via mass distribution.

But you knew that. You’ve heard it all before: we live in critical times.

“We’re witnessing the destruction of every institution in the land and nobody knows how to stop it.” James Howard Kunstler

The venerable George Orwell had a suggestion:

“We have now sunk to a depth at which restatement of the obvious is the first duty of intelligent men.”

Written in 1939, it refers to truths that have become dangerous to utter.

So what does this have to do with Paul Revere?

An objective consideration of the state of America’s affairs would conclude Mr. Kunstler’s – and others – assessment is spot on, which makes Orwell’s statement equally apropos.

Even though Paul didn’t complete his round trip successfully, the take-away is the positive effect of repetition, also one of the most effective tools in the practice of propaganda. Semantically, we have been taught “propaganda = bad”. Not so much. As Revere, Dawes. Prescott and reportedly hundreds of others demonstrated that night, repetition is also a good thing.

We are all Paul Reveres now. Today’s ‘lanterns in the North Church tower’ shine every day on every newscast, in every newspaper, magazine, Drudge Report, Zero Hedge, the Blue State Conservative . The ubiquitous Internet rivals the hundreds of other ‘Paul Revere’s’ who rode through the summer night calling out to sleeping patriots the time had come. But not everybody read or heard it. And just like 1775, there are those today, 247 years later, who don’t want to read or hear “the Government’s coming”. These are the ones in 1775 who opened their windows to the summer night and yelled “Hey Revere! Shut up! It’s 2AM!” But it’s happening now and on an infinitely larger scale than the Founding Dads and citizens around Boston could have imagined. Many of our fellow travelers today don’t grasp it either. Cognitive Dissonance, Aggressive Ignorance, Contagious Apathy, separately or together have the same side effect: Intellectual Deafness. But “many” is not “most” and certainly not “all”.

Be Paul Revere! Better yet, be Dr. Samuel Prescott! 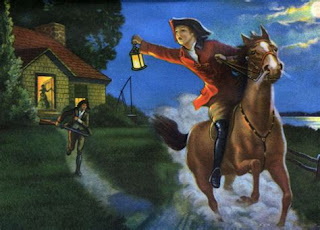