"Britney Griner may not be someone you’d have over to watch the game, even though she’d be available after dodging 9 years in a Russian prison. But with or without intervention, is it an honest reflection of American society that we should celebrate her sentence because we don’t like her political views?"

Now For Something Completely Different transcription:

WNBA star and anti-national anthem protester, Brittney Griner, will likely be on his/her way home to her wife, family, team and fans, thanks to a prisoner swap negotiated by Former US Ambassador to the UN Bill Richardson who does such things.

Since the arrest – and before the current excitement over at The Orange Man’s place -Griner’s public anti-anthem stance and subsequent arrest in Russia for illegally transporting cannabis vape cartridges into the country, has made her case the talk of the tabloids, talk radio, TV chat shows, pundits and politicians coast to coast. The tone of the “national debate” has been mostly hostile toward her for being hypocritical in dissing the USA and doing a spiffy 360 with her plaintiff wails of being wronged! She just didn’t know the law! It was a mistake! And the award winner: “They didn’t even read me my rights!” – as if Vlad has a soft spot in his head for the Miranda Decision.

Earlier this month, she pleaded guilty to the charges, telling the court that the cartridges were for medicinal purposes and that she didn’t intend to bring them with her.

“I still don’t understand how they ended up in my bag,” she said. “I had no intention to break the law.” She added she was "rushed packing and stressed packing ... I was in a huge hurry.”

"As they ended up in my bags by accident I take responsibility but I did not intend to smuggle or plan to smuggle [banned substances] to Russia,” Griner explained. . Washington Examiner

Right…And the dog ate my basketball.

There’s an ancient cliché in the law enforcement biz: Don’t bullshit a bullshitter.

Irrespective of the Boo-Hoo’s, this might be a great opportunity for something completely different….

While Red, White and Blue blooded Americans are pointing and sneering at the fate of someone with obvious political issues, there is the bottom-line principle of the punishment fitting the crime, regardless of who committed it or where the offense occurred, Russia’s sovereignty notwithstanding. When taken together, since America declared its War on Drugs, the carnage of innocent people, destruction of families, property and trampling of human rights rivals the costs of the never-ending undeclared wars we’ve waged around the world. Considering the thousands of young men currently incarcerated for years for the mere possession of a weed when murders, rapists, and armed thugs walk free conducting their business as usual strongly recommends a serious re-examination of the nation’s drug laws – and our concept of Justice.

Should all drugs be de-criminalized? Just some drugs? Some amount? What about ‘My Body, My Choice’? Individual responsibility? Are you still OK with the government mandates of COVID jabs? The Roe v Wade decision? Are you comfy with the Government unilateral take-over your body?

Britney Griner may not be someone you’d have over to watch the game, even though she’d be available after dodging 9 years in a Russian prison. But with or without intervention, is it an honest reflection of American society that we should celebrate her sentence because we don’t like her political views? Whether she sits, stands, pouts or no-shows for the National Anthem – so what? No one gets injured. No child abused. No business is robbed, woman raped or senior citizen molested as a result. Yet the people committing these serious and often deadly crimes walk among us with impunity, often committing and re-committing similar crimes without punishment.

Now that this story has already been moved to the Old News file on ABCCBSNBCCNNFOXMSNBCNPR, it could be revealing to reflect on how wildly upset the chattering classes have been about the plight of Ms. Griner while the Biden Administration, politicians, MSM and too many of our fellow travelers were deathly silent about the Americans and friends left behind – and remain – in Afghanistan

We better get that ‘national conversation’ started before I get run over by a glacier. 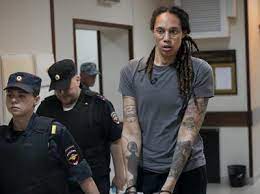