“Attack Against Democracy”! – How Cool Is That?

"Leaving aside for a moment the fine art of Projection, perfected and practiced by liberals everywhere, what is this “Democracy” they speak of and want so desperately to protect? In its simplicity, the question is almost embarrassing to ask, but nevertheless, Is America a democracy? If so, when did that happen? Who was in charge of the change? Why didn’t we get the memo?"

(Transcription from the Now For Something Completely Different podcast. Listen here)

Quite the rage these days (Mid-Term season), Liberals/Democrats and their wholly-owned mainstream media subsidiary are hammering on Conservatives/Republicans, especially “MAGA Republicans” (© Dark Biden). In case you haven’t heard, by their beliefs, philosophy, comments, and conduct, these red-capped scrunge-buckets, outcasts of polite political society, are waging “an attack against our Democracy!” (repeat, repeat, repeat).

These “attacks” include but are not limited to: the support of limited government, preservation of individual rights, government accountability, an end to war, consistent observation of the Bill of Rights, the Rule of Law, Constitutional limitations, free choice, free will, the daily pursuit of “Life, Libert and…Happiness” – the cornerstones of America and, of course, all that drivel from those dead white guys, the founding dads. Oh – and everyone who disagrees with and did not vote for Joe Brandon. These individuals, by believing and supporting these pillars of America, the very principles of freedom, all embody an “attack against our Democracy”.

Leaving aside for a moment the fine art of Projection, perfected and practiced by liberals everywhere, what is this “Democracy” they speak of and want so desperately to protect? In its simplicity, the question is almost embarrassing to ask, but nevertheless, Is America a democracy? If so, when did that happen? Who was in charge of the change? Why didn’t we get the memo?

Ben Franklin, an original “Founding Dad”, famously answered an inquiring woman what those assembled in Philadelphia cobbled together for the restive colonies? “A Republic…if you can keep it”. But today’s liberals, many of whom are congressmen, senators and even the president constantly refer to the country as a “Democracy”! How could that be? Even the Pledge of Allegiance reminds (some) elementary school kids every morning that their pledging “…to the republic for which it stands…” So where did that ‘democracy’ thing come from? Why wasn’t the Pledge amended?

First, what is a democracy? There are lots of snappy one-liners to answer that – “Democracy must be something more than two wolves and a sheep voting on what to have for dinner.” (James Bovard). Jim may have had old Ben in mind who said years earlier, “Make yourself sheep and the wolves will eat you.” From what we’ve experienced over just the last 2 years of the so-called ‘pandemic’, it appears sheep in America are thriving!

What is a “democracy? This is where it gets sticky. If we check the source most basic to internet searches, Wikipedia, we get:

“Democracy…is a form of government in which the people have the authority to deliberate and decide legislation ("direct democracy"), or to choose governing officials to do so ("representative democracy").

But the ‘majority’ that ‘rules’ isn’t the majority of us – it’s the majority of them, the “rulers”, sometimes a ‘supermajority’ of them, and, of course, the comfy-cozy, guilt-free, non-threatening ‘consensus’.

Does that sound like the government in Washington you’ve come to know? Are the ‘governing officials’ you’ve chosen ‘deliberating’ and ‘deciding legislation’ you want? Are you OK with the situation at our southern border? How about the billions of your dollars sent to Ukraine? Is the ‘American Energy Policy” and resulting gas prices something you support? How about that Federal Reserve? OK with them? If you ask the all-knowing Google “Is America a Democracy or a Republic?” the first 10 responses from generally credible sources say Yes, No, Both, and “it’s complicated”.

Really? So complicated it requires all this verbal tap-dancing? If it’s so complicated, maybe America isn’t a ‘democracy’ or a ‘republic’ at all. Why not choose a word that most accurately defines precisely what we are?

government by the few; a government in which a small group exercises control especially for corrupt and selfish purposes;

Most classic oligarchies have resulted when governing elites were recruited exclusively from a ruling caste—a hereditary social grouping that is set apart from the rest of society by religion, kinship, economic status, prestige, or even language. Such elites tend to exercise power in the interests of their own class.

Doesn’t that sound more like the Washington swamp we’ve come to know and despise?

There are other swell terms that fit the Logic Free Zone… plutocracy, hypocrisy, dictatorship, police state, pig vomit…the list goes on and on.

But at this stage, it appears “democracy” doesn’t make the cut! It’s false advertising! It’s fraud! A lie used intentionally to mislead and keep those sheep Bovard and Franklin mentioned in the dark, misled, well fed, and obedient, so fleecing and the dinner comes easy.

Democracy? Why not attack it? Don’t favor Truth and Justice over Lies and Corruption? And especially among our chosen rulers!

“Attack our democracy”? Seriously? Look who’s talking. That will tell you who’s voting and what’s for dinner. 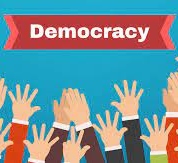