"There is no limit to how many times the Magic Button can be used. Ignorance is bliss. Denial is not admission. Unheard is unasked."

Pee-wee Herman, clowntoonish (and ill-fated) ‘80s-‘90sTV star had a fall- back defense in his various mis-adventures: “I know you are, but what am I?”

Democrats in general and the Biden Administration in particular have adopted Pee-wee’s elementary school retort, grafting it onto White House communications policy. Democrats have been using this oblique transparency strategy for decades. Recently, it has been re-branded “Whatabout-ism” as in “Oh yeah? Well, what about Trump…?” In Psych class, it’s taught as Projection. It can be seen performed in living color at the daily White House press briefing when Cringe tries to field the Daily Doocy.

The old saw “it’s not the crime, it’s the cover-up” is rapidly finding a new home in the DC News narrative. The lengths Biden & Co. are going to pretend “there’s nothing to see here” will soon exceed all leaps of Olympic proportion in the Credulity Competition. Republicans have already submitted a petition to change the Potomac to Denial. By spring, Sgt. Schultz is expected to take over as White House Press Secretary.

Both frustrating and fascinating to the Electorate is the blithe manner in which Biden & Co. dismiss their identical sins that so recently outraged them when committed by former Pres. Orange Man. Not surprising, the White House Press Corpse provides the smoke screen for all this wide-eyed innocence by running cover for every Administrative oopsy, from falling up stairs to marble-mouth spoonerisms only a speech therapist might comprehend, choosing instead to debate and derail Republicans with ambushes Jesse James would love. When Mr. and Mrs. Sixpack can easily spot the MSM’s dis-information in the grifts and gaffs, one explanation comes from independent veteran journalist, Caitlan Johnstone:

“Indeed, it’s very rare in the west to see mainstream journalists hold other mainstream journalists accountable for their false reporting, facilitation of propaganda, or journalistic malpractice, unless it’s journalists whose approval they don’t care about like members of the opposite political faction or independent media reporters. This is because western journalists are worthless, obsequious cowards whose entire lives revolve around seeking the approval of their peers.” Western Journalists Are Cowardly, Approval-Seeking Losers

In order to live down to Ms. Caitland’s description, mainstream journalists and politicians both employ another popular option: the magic Ignore Button; a simple press and everything becomes transparent in that it disappears from concern, responsibility or culpability. Poof! All gone until the next compromising moment. There is no limit to how many times the Magic Button can be used. Ignorance is bliss. Denial is not admission. Unheard is unasked. From the cacophony at the end of press conference to the benign, unperturbed stroll from the White House to Marine One, the non-answer is the transparency, “the evident demonstration of reality although not beheld.” (Heb. 11:1 with apologies to Paul).

Left dangling in unfulfilled anticipation are answers the Sixpacks want: Who? What? When? Why? All remain unanswered until next time. And if Johnstone is correct, the next time and the time after that. It’s the way the Media and Political Popularity Contest is played and won. Transparency is a word the merely loiters in their vocabulary.

So whatever became of the immensely popular Pee-wee Herman? At the pinnacle of his success, Paul Reubens was unceremoniously arrested in the lobby of an ‘adult theater’ in Florida for demonstrating to a Sarasota detective how Pee-wee got his name. His career was ruined. What lessons might we take from this? Precious few, it appears. The President’s wandering Classified Documents have been removed from the cherished Corvette’s guardianship while Hunter Biden’s laptop has given us way more than Peewee ever could. The difference is Paul ‘Pee-wee’ Reubens went to jail, a fallen star and ruined man.

Maybe Biden & Co and the Democrats should think about that as Republicans let the dogs out. 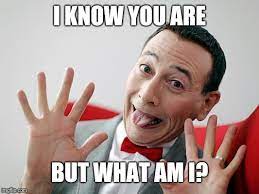