Hopefully, you recall Shoeless Joe Jackson’s final words to Ray Kinsella in the baseball classic, Field of Dreams. (If you don’t, watch the movie and come back. This article will still be around here somewhere. ED.)

Thinking of that scene and the opening gambit that ran through the plot… let’s make an analogy of it. Here’s the premise:

Starting on a guilt trip as a teenager (dissing his father about playing a game of catch), Ray, now a family man and famer, hocks his life savings and most of his corn crop to build a baseball field in Not Heaven, Iowa. Because out of nowhere comes this raspy whisper, “If you build it, he will come.” The Mystery Voice somehow moves Ray to plow under his corn crop and build it; all the neighbors think he’s nuts. Nevertheless, Ray soldiers on unwittingly toward bankruptcy, adding anecdotal characters Shoeless Joe Jackson, Terence Mann, Doc Graham and other ghosts of baseball legend. Only Ray, his wife, daughter and, later, Terence Mann can see the players scrimmaging on the new field. Ultimately, Jackson, Mann, Graham play out their respective parts, building to the final scene:

Ray is angry at not being invited to join the team of old dead guys but Shoeless Joe rebukes him, glancing towards the catcher at home plate saying, "If you build it, he will come." When the catcher removes his mask, Ray recognizes him as his father, John, as a young man. Ray realizes "ease his pain" referred to his own regrets... Ray, calling his ‘Dad” asks if he wants to have a catch. John gladly accepts as hundreds of cars are seen approaching the field, fulfilling the prophecy that people will come to watch baseball.”

So what’s the analogy in a haunted corn field, a baseball game, spooky voices, and a parental reunion epiphany lit up by the headlights of 1500 cars driving in to insufficient parking for a night game not being played?

Ray is us. The cornfield is our country. The “Rays” understand the voice to be saying ‘tear down the status quo for something that will better serve your family and country.’ “Ray,” gets into it, throwing his resources behind the concept, and begins laying the groundwork. “If you build it, he will come.” is the provocative idea more and better things will arrive, better than the corn field, the ‘system’ currently sustaining us.

The neighbors and townsfolk see “Ray’s” efforts as objects of ridicule, deriding the notions of freedom, liberty, and fiscally responsible, Constitutional government. They are the statists, psychos, narcissists, grifters and other bad actors supporting the status quo of corrupted government. Breaking with “normal” – like Ray’s baseball field or freedom-loving “Rays” who still make up majority of American citizens - are to be excoriated, publicly shamed, foreclosed in their livelihood, families disabused of their beliefs in freedom over force, liberty over coercion.

Today’s Republican “Rays” feed off the legends of past political heroes – Washington, Jefferson, Adams, Reagan, Trump – even Ron Paul - who fought great battles that brought us to this time in the America we came to love. Learning about their accomplishments against all odds, leaving guiding lights of word and deed to sustain a new nation going forward, building that shining city on the hill, that great American Experiment in Self-Governance.

In the movie, Ray is crushed when he doesn’t get his way: uninvited to join the ghosts as they disappear back into the remaining corn crop. When the Tea Parties’ efforts didn’t produce miraculous results, participation dwindled. When elected officials failed their campaign promises and organized opposition smothered the freedom movement, the “Rays” insouciance, indifference, inertia, and apathy took over, voter participation and enthusiasm dwindled - at least until Trump arrived.

In the film, Ray Kinsella gets a butt-kick from Shoeless Joe, nodding pointedly to home plate with ‘if you build it, he will come,” Ray gets his epiphany and the trauma of puberty begins to heal; a happy ending albeit late in the game.

Today’s “Rays” don’t get the Happy Ending because they haven’t learned the lessons of their defeat. How have all the recent elections since 2016 wound up in the L column for the “Rays”? Mostly by fulfilling another great baseball player’s famous saying, “The definition of insanity is doing the same thing over and over again and expecting a different result”. (Albert Einstein, pitcher, Princeton Smarties)

OK - no analogy, parable, hypothesis or fairy tale makes a perfect point; prose is a perpetual target of subjective interpretation. However, even in this clunky comparison, the takeaway is: Republicans dream big about good things but their child-like naiveté and penchant for good manners send them naked into the political battles against Democrats who practice politics as a full contact sport. Winning is everything at any cost including lying and cheating; Power is the only acceptable goal. Republicans believe winning would be preferred; ‘good is better than bad because it’s nicer’ but only if campaigns are conducted ‘according to Hoyle.’ So they continue to squander their future – plow under their corn, so to speak - fueled with emotional adrenalin, ignoring practical lessons that should have been employed, races lost by ‘doing the same thing over again expecting a different result’. They get it – only it’s worse, not better.

Whether symbolic baseball or political hardball, the Republican’s days of fantasy politics have been dead for decades. Whatever the reasons – upper-class, pinky-raised upbringing, poor potty training, or timid, politically flaccid ‘leadership’ calling the plays– until they understand what it takes to win, accept the lessons learned and employ successful, new strategies, they are doomed to the political bleachers, along with Libertarians and other perennial losers, who fail to muster the brains, bucks and guts to play successfully in the big league. Their “Field of Dreams” will remain just that: a fantasy, populated with the ghosts of legends but ending in another disappointing dream sequence for spectators. 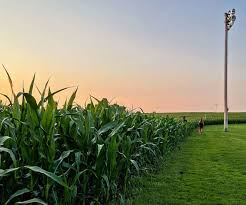